Endeavor Bulgaria’s Board Member Vassil Terziev has been named the recipient of the 14th Annual Atanas Burov Prize in Industrial Management. The Burov Prize is among the most prestigious awards in Bulgaria that is given to individuals who have greatly contributed to the economic development of the country. 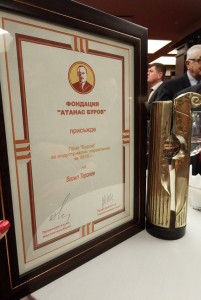 Vassil Terziev is a Co-founder and co-CEO of Telerik where he played a key role in growing the company from a start-up in 2002 to a leading global provider of software solutions for businesses with 9 offices in 7 countries and over 130,000 clients, including 450 out of „Fortune 500®“ companies.
After Progress Software (NASDAQ: PRGS) acquired Telerik in 2014, Vassil took the position of Chief Innovation Officer at Progress where he is responsible for the company’s long-term growth strategy, identification of new markets and development of innovations.

Vassil Terziev received the Burov Prize and the “Atanas Burov. Life devoted to Bulgaria” book on January 28th, 2016 at a special ceremony in Sofia, Bulgaria. The prize is awarded annually to celebrate the country’s most inspiring leaders and their accomplishments in innovation, business practices and entrepreneurship which have a major contribution to Bulgaria’s economic development.

Vasil Terziev is also one of the founding members of Endeavor in Bulgaria. Endeavor is a leading non-profit which operates in 25 countries. It chooses and supports entrepreneurs with big ideas who can grow to become role models and whose businesses would become key drivers for long-term economic growth, job creation and innovation. These entrepreneurs have the potential to change their countries and the world. In 2014, Endeavor entrepreneurs generated revenues of $7.7bn and created more than 500,000 jobs. The focus of Endeavor is on companies that are already successful in what they do but which need some further expertise, contacts and resources in order to take the next step in their development.

Thank You to Our Dare to Scale Interviewers 2022

Endeavor Bulgaria Initiative – educational support to the children from Ukraine

The Rise of Female Founders