Another article on blockchain technology? How fun!

Blockchain could very well be one of the most important technological developments in modern times. It’s a weird, yet fascinating, mix of simple economics and complex cryptography, that enables disintermediation, decentralization and self-governed communities. Tokens/cryptocurrencies are used for behavioral incentives and trust is taken care of via an immutable transaction database (let’s use database as ledger is a rather confusing word for most.)

How far are we into mass adoption of blockchain?

Truth be told – not too far, and there are number of reasons for this. First and foremost, the very concept of blockchain is still understood by a tiny few. If you are still unfamiliar with the term, an article by Mohit Mamoria for Hackernoon explains it pretty well.
Secondly, the current user experience, for the selected few that have dared to try anything on the blockchain, is downright horrendous. We can’t seriously expect the average person to cope with 30-character wallet addresses, private keys and nailing down the right transaction fee, in hopes that the transaction actually goes through. Huh!?!
Then comes the hype. Oh boy, what a rollercoaster blockchain and cryptos have been over the past couple of years. While all the hype has certainly helped in building a community, it has somewhat hindered the technology itself by pumping expectations. Initial Coin Offerings promised the decentralization of everything. Projects were put on the blockchain just to raise funding by selling tokens with dubious value apart from speculation. Cryptocurrency exchanges could not handle all the traffic. Everybody and their mom, even institutional investors, started pouring money into a technology they did not understand. Bitcoin and other cryptocurrencies were handed the task of “bringing power back to the people”. As good as it sounds, can we, as a society, handle complete decentralization? Of course, not.

Centralization, to a certain degree, is necessary.

In fact, it is desired. Would anybody use platforms such as UBER, Airbnb, Facebook, Instagram or whatever, without some form of authority on top moderating content and/or participants. It doesn’t take a lot to imagine the travesty going on in a completely decentralized environment. This point is brilliantly explained by Ryan Lechner at ConsenSys Labs, who presented a model called “Minimum Viable Centralization”. His piece is rounded off in a simple math equation:

And yes, stable support systems do require centralization of some kind. This model will however take a certain amount of time to be achieved, through multiple iterations by the P2P tech community, institutions, corporates and consumers alike.

What’s next for blockchain?

At the end of the day, blockchain is a truly phenomenal technology which has the potential to (and almost surely will) disrupt many industries while creating new business models along the way. And institutions will have to adapt. We’ve already validated the use of blockchain for cryptoeconomic experiments such as crowdfunding. ICO funding exceeds $11 billion for 2017 and 2018 combined. In addition, we are starting to see some valid applications in manufacturing, supply chain and healthcare, among others. With that being said, we are far from mainstream adoption. In fact, we are at least 5, maybe even 10 years away.

The Gartner Hype Cycle for Emerging Technologies is an annual tech trend analysis which has proven to be a remarkably accurate timestamp of each “hyped” technology’s position on the market. In July 2017, the analysis showed that blockchain is just past “The peak of inflated expectations”. Six months later the cryptocurrency market crashed 70%. 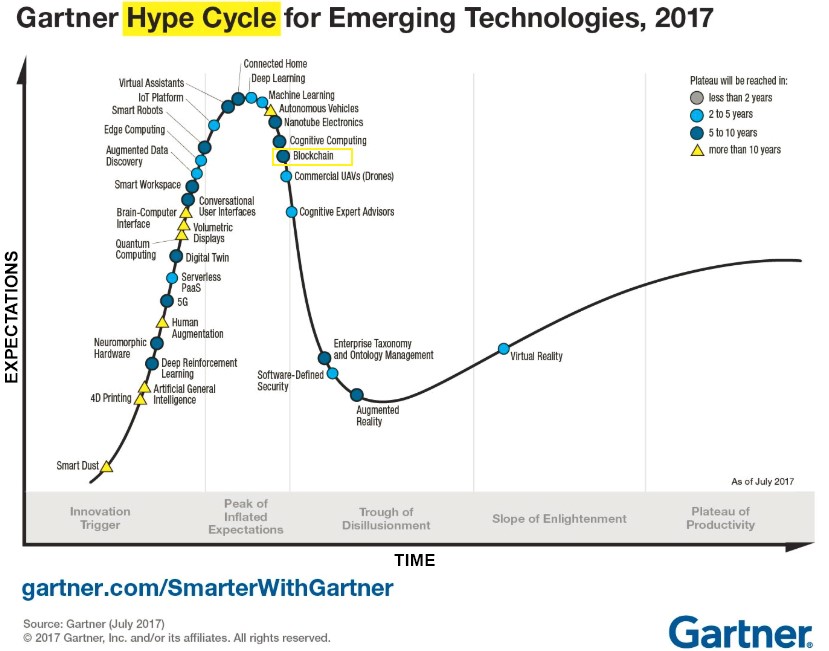 We are currently passing the “Trough of Disillusionment” and eventually headed for the “Slope of Enlightenment” and “Plateau of Productivity”. The latter is where the real value of the technology will be extracted.

Like it or not, blockchain is here to stay. However, both the technology and the community have to mature before the value is brought to the masses. And that’s nothing new. It’s been said again and again by the pioneers in the community who are able to see through all the smoke and “get rich quick” (or lately not so rich) schemes. Curious to see where all that leads to.

Share:
Entrepreneurship and Entering a 2-Billion-Dollar Market Through Customer Feedback »