LEARNING FROM THE PAST, AND LEADING FOR THE FUTURE

Endeavor launched with a simple vision. We believe in a world where anyone, from anywhere, can hatch an idea; access the networks, talent and capital to take it to scale; achieve success; and pay it forward to inspire and enable the next generation. Twenty-one years, 30 countries and 1,800 selected entrepreneurs later, we’re not only promoting that same goal but standing as the worldwide LEADER of the high-impact entrepreneurship movement. 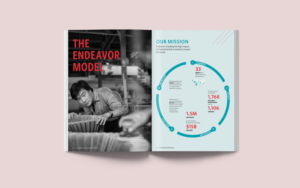 But while the mission set out 21 years ago was only a vision, today as LEADERS we have a far better understanding of what it means to be high-impact. It starts with entrepreneurs themselves. We like to say that Endeavor is all about Outlier entrepreneurs, the select few who build and scale lasting businesses, create thousands of jobs, mentor and invest in the next generation and inspire countless others to follow in their footsteps. They are the heart and soul of the lasting economic and cultural impact of entrepreneurship in their communities.
What does Outlier success look like? Here are just a few of the milestones our entrepreneurs celebrated in 2018: 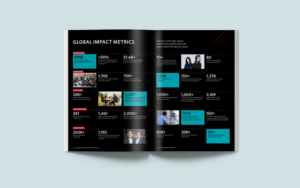 Like any high performing organization, we set ambitious targets and constantly THINK BIGGER. When Edgar Bronfman, Jr. became board chair in 2010, he set a target of expanding to 25 countries by 2015. After we reached that goal, we outlined a more ambitious agenda for 2020, including a target of Endeavor Entrepreneurs creating two million jobs and achieving $20 billion in annual revenues. As we set about reaching—and surpassing—those 2020 goals, it’s time to look ten years forward to 2030 and imagine what #OneEndeavor—our team, our network and our entrepreneurs—can achieve. Here’s what we know about the future so far.

As we build the future, networks like Endeavor—open, transparent and borderless—will be of vital importance. We invite you to look inside our 2018 Impact Report and join us on our #OneEndeavor journey.

The Rise of Female Founders

Thank You to Our Dare to Scale Interviewers 2021