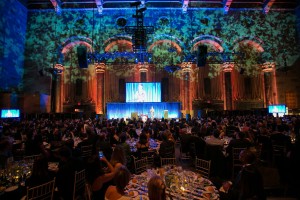 On Friday, November 6, 2015, the Endeavor Gala brought together over 500 entrepreneurs, business leaders, Endeavor Board members and supporters in New York City to celebrate the power of the network. As Endeavor’s only annual fundraising event, the Gala is held in support of the organization’s mission to select, support and scale high-impact entrepreneurs in growth markets around the world.

This year, this elite audience included over 25 Endeavor Entrepreneurs from across the globe as well as various worldwide Endeavor Board Members. The event highlighted the power of Endeavor to transform global economies, with a particular focus on the connections made between cities, countries and regions. Endeavor now operates in 25 markets and 50 cities.

The Gala honored designer and fashion mogul Diane von Furstenberg, who first entered the fashion world in 1970 with a suitcase full of jersey dresses. Four years later, she created the wrap dress, which came to symbolize power and independence for an entire generation of women. By 1976, she had sold over a million of the dresses and was featured on the cover of Newsweek. After a hiatus from fashion, Diane re-launched the iconic dress that started it all in 1997, reestablishing her company as the global luxury lifestyle brand that it is today. DVF is now sold in over 55 countries. 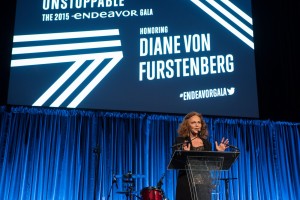 During the event, Endeavor co-founder and CEO Linda Rottenberg and Global Chairman Edgar Bronfman, Jr. addressed the milestones achieved by the organization over the past year and recognized the high-impact entrepreneurs that have become role models from Brazil to Turkey. Four such entrepreneurs were also featured in this year’s gala video, which focused on female entrepreneurship in honor of von Furstenberg, Endeavor’s first solo female honoree.
Watch the Gala video HERE.

In her speech, Rottenberg highlighted the importance of helping entrepreneurs realize their “impossible” dreams in order to scale businesses that create thousands of jobs and generate billions in revenues.

Bronfman followed with a speech that spotlighted Endeavor’s receipt of the 2015 Kravis Prize for Nonprofit Leadership as well as the achievement of expanding to 25 countries this year.

“When I joined the board ten years ago, I set a goal for Endeavor to reach 25 countries by 2015,” Bronfman said. “As we close in on that goal, our next goal is to generate two million jobs by 2020.”
Watch his full speech HERE.

Share:
Endeavor Bulgaria’s Board Member Stefan Gugushev is Part of the National Jury at Get in the Ring – the Olympics for Start-Ups »